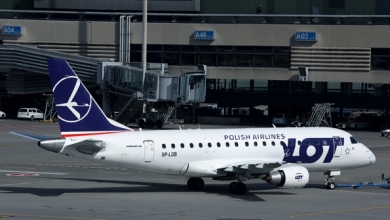 Polish investigators have detailed a bizarre incident in which a...

Polish investigators have detailed a bizarre incident in which a LOT Embraer 170 was obstructed by taxiway painting work at Warsaw’s Chopin airport after vacating the runway at the wrong exit.

After being given landing clearance, the aircraft, arriving from Amsterdam, was instructed to leave the runway either through taxiway A4 or taxiway L, which connect to the far end of runway 11.

But having landed at 21:20, according to Polish investigation authority PKBWL, the crew vacated the runway at taxiway N1.

The aircraft encountered a group of airport workers painting ground markings on the intersection of taxiways N1 and E2, and was ordered to stop by ground traffic control.

The painting team left the taxiway and – after the paint dried – the aircraft continued to taxi.